A Witness in the Wild 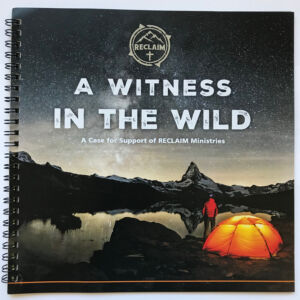 Several weeks ago we sent out an end of year update letter, some of which also contained a case statement (pictured above) explaining in detail our vision and mission for reaching men, and asking individuals to pray about partnering with us. The response was wonderful, however it was this unexpected response that shocked me!

Doug, a good friend who had received the mailer contacted me and said: “Remember that case statement you sent me? I just used it to lead a man to Christ!”

This is how it happened: Doug had received the mailer, reviewed the case statement and then laid it on his desk to pray about. Later, a man I’ll call Scott came to Doug’s office to interview for a job position. As Doug conducted the interview, he sensed the Lord prompting him to care for Scott in a deeper way. So, Doug began by asking him some questions about his personal life. That was all it took! As Scott responded it became clear to Doug that this man was deeply hurting and in need of good news!

Doug looked down on his desk and there was the Reclaim case statement. He picked it up and began showing Scott that he wasn’t alone, that all of us are broken, lost and trying to figure life out. Doug showed Scott the truth that he could be healed and set free by making Jesus the Lord of his life and asked him if he would like to do so. Scott responded right then and there. He asked Doug to pray with him, and in that moment, in what was supposed to be just a normal job interview, Scott surrendered his life to Jesus!

But the story doesn’t end there, Doug encouraged Scott to plug in with a local church, which he has not only done, but has also been sharing his newfound hope with his son!

As I was thanking God for Doug’s faithfulness and Scott’s newfound life, God reminded me of two things:

First, the fields truly are ripe for harvest…men are lost, hurting, broken and in despair. And we have what they need. Our message is one of HOPE. The wild hope of the Gospel that changes everything: that we can be restored back into perfect love, peace and freedom with our God and Father.

Second, there is no such thing as a normal day. No matter where we are or what we are doing, if we ask the Holy Spirit to lead us and consent to follow, He will show us how to walk with God while experiencing and advancing His Kingdom!